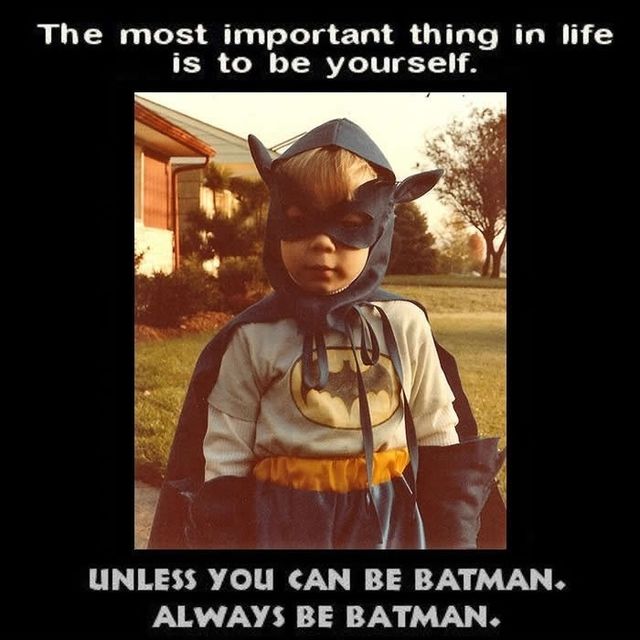 Just a quick note to help me remember my dreams from last night. I'm back to not remembering them most of the time, and I want to start recalling them. Time to start writing them down again.

In the first portion of my dreams from last night that I recall, I was at a very large party filled with people. The setting was some large space - like a gymnasium or something similar. Very tall as well as wide.

The party was a sort of double masquerade. Everyone was role playing as a Batman villain, but the idea was not to be overt about it. Not to wear their costume outright. Then, through how they acted/talked, you tried to figure out who they were.

Except I was Batman. I remember feeling VERY tall as I walked around the room. I was talking to people in a very 'Bruce' fashion. Curt, polite, but no frivolity. It was confusing the hell out of people.

It just goes to show the weirdness of dreams. If Batman was an option? Pretty sure I wouldn't be the only person playing him.

As the dream went on, I found things getting a bit more 'real'. Which is to say that people were sorta taking on their roles more realistically. Less a masquerade. They weren't the characters they were playing, but instead simply behaved more like them and it was less 'acting'.

Pretty sure I've never watched a full episode of his show, but somehow he gets a guest spot in this awesome dream.

Anyway, Jerry was stuck up on this tiny stand. It was enough to stand on, but not much more. Maybe 3'x2'. He was crouched and his fingers were wrapped around the edges of the platform in the way that they would be if he was holding it to the bottom of his feet. I have no idea how/why he was stuck this way, but he was.

Someone tried to lower the platform, which would have pinched/severed Jerry's fingers, so I moved beneith it and held it up with my shoulder. I wasn't Batman anymore - just me - a decent human being. The unknown villain kept trying. They were trying to hurt Jerry - it wasn't any kind of an accident.

It didn't work, and Jerry and I lifted really high into the air. As some of you may know, I have a terrible fear of manmade heights, and I was hanging on with just my arms, which were growing terribly tired. It was really terrifying.

We were eventually lowered again, when our assailant grew tired of us not falling/dying/screaming/whatever.

I immediately launched myself at them. They danced away from the controls to the platform and played innocent.

While I was confronting them, someone else went over near the platform and smashed my Wacom or iPad (not sure which it was - in the dream it was my 'digital tablet') in an effort to hurt me for interfering. It worked. With all the artwork and effort I've put into these devices, I was was really upset as I tried to play it off as 'no big deal' and cleaned up the shards of the device.

And that's about where it ended.

So, here's my armchair analysis.

You're aware that everyone casts themselves as the hero in their own story, even when they're supposed to be casual about the whole thing. You're aware that you do it too. You feel like you get called into service to help others, and you're willing to do it. Unfortunately, the reward doesn't match the risk you take, and sometimes it comes back to bite you in the ass when others don't respect your values (as evidenced by the broken tablet), But you play it off like it's no big deal because you want to be the good guy, even if it's an infringement on your needs and values.

Would have been better if I had been able to get a leg up on those attacking, but I'm not going to lie - I remember feeling like a complete badass for just accomplishing what I did.
Matt Lichtenwalner 7/18 '17

Right? It was pretty solidly stressful (I couldn't seem to 'gain traction' fighting the folks who were trying to Do Wrong.) but at least it was really damn interesting.
Matt Lichtenwalner 7/18 '17

I can't wait to read what the Dream Analyzer People of OPW have to say about this.

I dunno. In last night's dream it was me who did a *really terrible holy shit* thing. That wigs me out way more than people being mean to me in a dream.
Thomas Boutell 7/18 '17