Art is my illicit drug of choice. The more I create, the more I need to make to get off.

Okay, so I put it that way to be a touch provocative, but it's also kinda true. I've been doing more illustration work pretty much every chance I get and I'm still getting further behind. What's more, I want to do more. That's kinda crazy. 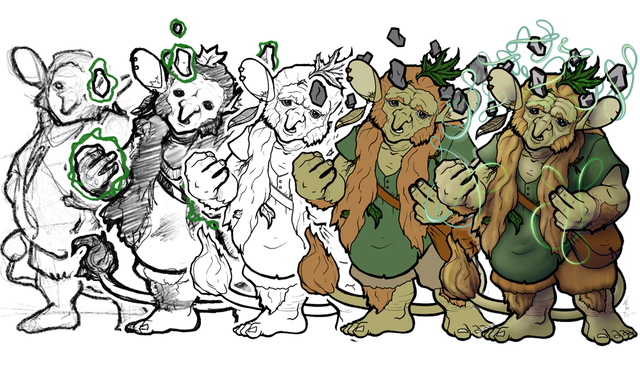 ETA: Okay, I think I was going to go deeper into this and then change the post to public, but I've lost the train of thought and figure I should just let folks see it as is for now. I can always comment more later if I get that thought back.

Thanks beb. All I can see is how very far they have to go, but I'm glad someone is seeing the improvement. ;)
Matt Lichtenwalner 9/15 '18

The dimension in the last female figure iteration is wonderful.
Shelle Klein Houser 9/21 '18

The one that's all the way left? The were-panther?

In any event - thanks! I've been working pretty hard on my female forms recently. I want to be able to do 'ideal' but not make that every female character like in bad comic books. Too often, comic artists learn a 'template' (which, of course, is some kind of idealized Olympic athlete which somehow retains breasts and butt cheeks) and just apply that template to every female character ever.

Not the were-panther, the one in the second picture, the one with the big ears.
Shelle Klein Houser 9/26 '18

Ahhh. Gotcha. Technically, that's a he/him, but you can't really tell since he's wearing a poncho. I _was_ also told to make him quite chubby. If you're curious, there's more info on this one in particular (and my process in general) here: http://dragonbones.net/character-portrait-drawing-process-a-step-by-step-demonstration/
Matt Lichtenwalner 9/26 '18