Still doing the heads thing. Here we have 36-40 and they be gerblins!

In case you're curious about the pseudo random geometric shapes I started this batch with, you're in luck - here they are:

If you would like to see the rest, they're in a thread over on the Twitterz.

Not So Traditional Media

So I won't be in town, but my family is having a get together this Sunday. There's going to be some festivities for the youngins' thanks to my folks. Slip 'n Slide, water balloon toss, etc.

And speaking of tossing water balloons, my folks asked if I would create a target to put down in the yard so they can launch balloons at it from the deck.

My Dad got the idea that it would be good to use Tyvek since it's all white so the image would stand out. Tyvek isn't exactly the best surface to work on, but I couldn't argue with the contrast idea and he has a bunch extra so it was free, and it's durable, so... Sharpies worked to lay in lines: 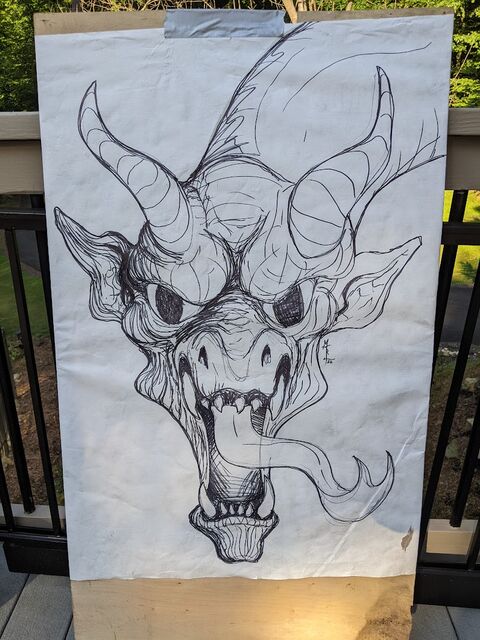 Then, because this is clearly a "use what you've got handy" kind of project, we used a pair of random latex based house paints (watered down to various levels) that they had on hand and some overly large brushes to paint it. This was a little extra trying BECAUSE TYVEK.

But also, I was having fun doing something stupid and calling it art. So: 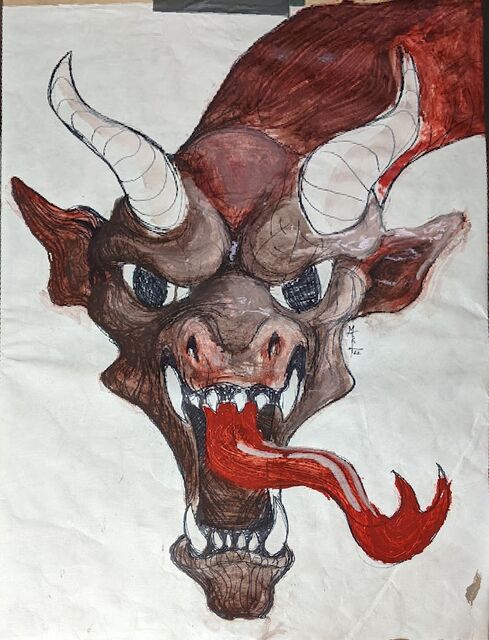 Certainly not the greatest work I've ever done, but it was fun, and hopefully the kids will get a kick out of chucking stuff at it. :)

Also, it kinda looks like a goblin head. I think I've got goblins on the brain lately.

And just like that, I notice the horns coming in at odd angles into the eyebrows. Apparently the sun was getting to me as I worked on this outdoors.

I'll never be able to NOT see how b0rked this is ever again.
Matt Lichtenwalner 7/19

I wouldn't argue with dragon horns. I might throw water balloons at them.
Brian Rapp 7/19

Clearly, it’s due to swelling of his occipital ridge from that time he tried to eat a day care center outside of Jackson, Mississippi, and seven four-year-olds rolled a refrigerator directly into his head.
Can’t fool me.
Lindsay Harris Friel 7/20

That is a terrific water balloon target.
Lindsay Harris Friel 7/19