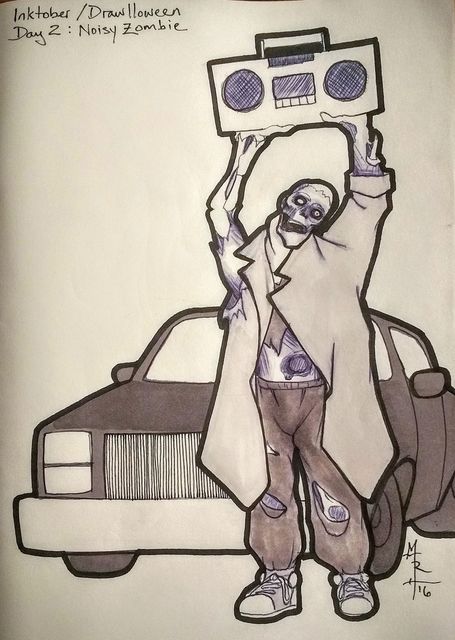 I decided to go a little sideways with my reference for this one. Look familiar?

Also - the darkest of my Prismacolor markers was going dry. You can see it in his sweatpants.

Tools - I 'cheated' by using pencil to rough out the design so tha it would follow the reference closely enough to be recognizable. Next was the cheapy ballpoint pen to draw the design. Sharpie pen to very line weight, and traditional Sharpie for the 'bold' stuff.

Oh, Say Anything. My first thought was Radio Raheem from Do The Right Thing because ...
Yeah.
Shelle Klein Houser 10/3 '16

Do you know - I don't think that I've ever seen DtRT. I'm not sure how that's possible, but I'm going to add it to the list right now.
Matt Lichtenwalner 10/3 '16 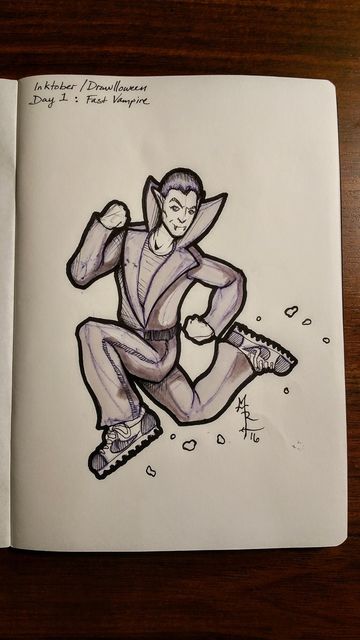 Day One of both Inktober and Drawlloween. Went with something a little goofy, and light hearted to start things off.

Used a pic of Bugs Bunny running to get the body posture.

Already noticing that some of the proportions aren't really right, but I'm not too worried about it.

Used a cheapy ballpoint pen for the base drawing, a Sharpie pen for inking,  traditional Sharpie for the bold, and Prismacolor markers for the greys.

Tomorrow? Noisy Zombie. I have an interesting idea....