It's been go-go-go land here, so I apologize for not writing or generally being more present or responsive. I have been reading here and trying to comment where I can, but that's about all I can offer for the next 8-9 days or so.

We are now just a few days away from Beatlefest 2019. It's going to be the same format as last year, in the same location, etc.

The biggest change for me is that instead of using three enormous 3-ring notebooks full of sheet music, I'm trying to use my new tablet that I bought expressly for this purpose. I struggled so much last year juggling several percussion instruments and having to turn pages, so I needed something electronic with a bluetooth foot pedal. I labored over my decision, and I chose the Boox Onyx Max2 Pro, 13.3" e-ink tablet, so it's crazy-light, and easy on the eyes, and displays a sheet of music at full Letter Page size that my 48-year-old eyeballs can read.  I've been using this amazing app called MobileSheets Pro which is everything you want in a music-performance device.

Sadly, the app blew up last night (Friday night, just 11 hours ago) and I lost 4 days' worth of the notes I transcribed from my paper notes from last year. I am heartbroken. The app developer is ridiculously responsive, so he may be able to salvage some of it. I am not hopeful, but we're trying.

It's very late (or early, depending on how you view days)-- I've been trying to fix this since 5:30pm and now it's 4:09am (good morning, Jenn!). Today (Saturday) we core-band BeatleFest people move into the venue and get everything wired up for sound, and then we run a quick sound check with the core band.  Then the strings, horns, and Indian musicians come in Sunday to get them wired up and rehearsed.

And then we start Beatlefest on Monday!

In other news, my iron levels have crashed, but I go for an infusion on Tuesday (yes, a Beatlefest day). That was the fastest they could get me in, so I'll take it... and hopefully I'll be feeling magically awesome by Thursday night when I really need to be thinking clearly. It's remarkable how fuzzy my brain is when it doesn't get oxygen.

I can't believe your app crashed at the worst time! I hope you get something back!
Karen Kuhl 7/28 '19

The good news is that I got it all back! The bad news is I lost 3 days doing so, so now I'm 3 days behind in getting the rest of my written notes re-written into the tablet. Tonight (Night 3 of Beatlefest) is the last night of notes I have in my tablet. Nights 4-6 have no notes written, and they are also coincidentally the hardest friggin' music.

booooooo to that app crashing, that completely sucks. but all that tech sounds so cool! i always wondered how people using a tablet for music turned the pages, didn't realize it was a foot pedal. i feel like i'm living in the future.
Jenn A 7/28 '19

Yep! It's a bluetooth pedal! Some folks prefer to just tap the tablet which turns the page, which is still infinitely easier than turning paper pages. They even make a drum-pad that triggers the page turn for drummers.
Jill "xtingu" Knapp 7/31 '19

I've been getting hired to play a lot of percussion gigs lately; and these gigs require actual sheet music and precision. When hands are busy, it's hard to turn paper pages, so for my recent Genesis gig I used a tablet with a bluetooth foot pedal to turn the pages.  This was extremely liberating, and I will never go back to paper!

In the past, if I have a singing gig where I only need lyrics and not actual sheet music, my fabulous Samsung Galaxy Note 10.1" I inherited from Matt Lichtenwalner is the perfect thing. However, it's got a pretty big bezel, so it's just too small for actual sheet music that I have to *read,* like for BeatleFest. (I cannot memorize the harmonies  plus percussion parts to 215 songs, because the harmony I sing changes on each song. Am I singing top? Middle? Switching on Page 4 because Brendan has been singing a certain part for 20 years and so just for these two words I sing this other thing?)

After months of research, I settled on the Onyx Boox Max 2 Pro, which is my very first e-ink device. It purposely doesn't have a backlight, because I find that backlit devices cause eye fatigue like whoa, plus they can mess with the look of the stage when you have a fancy light show goin' on.  (I can always use a judiciously-placed stand light that can't be seen from the audience if necessary.)  This Boox Max 2 Pro sucker is 13.2", so it's larger than a sheet of 8.5" x 11" paper-- I don't have to squint or zoom to see my music. Yippee!  It's so much easier on my eyes, too!  And for making notes in my music, it's got Wacom 2048 levels of pressure sensitivity for the stylus, so making notes feels just like writing on paper, no lag, no bullshit.

But what makes this tablet very different from many other e-ink devices is that it's an Android device that isn't locked down (runs Android Marshmallow), so you can install stuff off the Google Play Store to your heart's desire.  It runs Mobile Sheets Pro (my favorite-- and the publisher even made an e-ink version just for this specific tablet since so many pro musicians use it now), and has no problem with my bluetoof page-turner pedal. YES!

My goal was to buy a high-speed two-sides-at-once scanner, take my 3 GIANT binders of Beatles music and scan 'em in, and stick them on my tablet for BeatleFest.  Alas, the scanner I purchased for this purpose scanned lightning fast (35ppm!), but only if you didn't need to deviate from the defaults. The moment you wanted it to tweak any setting (a little more contrast, please?) it crawled to an unacceptable speed. Like, I would still be scanning my Beatles music long after BeatleFest 2019 ended. :-)

I did a test run and scanned/imported my music for The Who tribute show we do (much less sheet music to scan), but I noticed that no matter which scanner settings I picked, I still couldn't easily read whatever notes I had written on my sheet music once I was viewing it on the tablet... which means I had to re-write 90% of my handwritten notes... which then looked sloppy because I was trying to trace over my original handwritten notes with the stylus. So annoying. 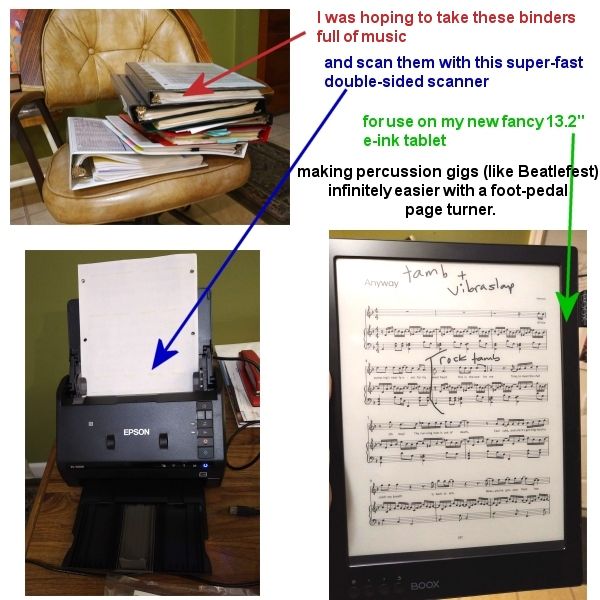 So because the scanner was a bust, I will be returning the scanner, and I'll just import the original, plain PDFs of my BeatleFest music, and I will transcribe my handwritten notes using the tablet stylus. It'll save a ton of time in the long run, I'm sure.

I'm really excited to be able to use this tablet for BeatleFest. I'll have my binders there as a backup, of course...

I'm also excited to get rid of that giant music stand that was blocking some of the cool percussion stuff that I was doing.  I know this tablet is large, but it's not nearly as intrusive as a music stand. And yay: hands free page turns!  Wooot!

There will still be plenty of gigs (mostly Hot Breakfast gigs) where I will prefer to use my smaller Samsung 10.1" Galaxy Note tablet, mostly because that smaller tablet is a full-color device (very helpful for lyrics) where e-ink tablets are obviously greyscale only.

But it's nice to have the choice.  My eyeballs aren't getting any better as I get older, so having some options is really nice.

Most people's sheet music is just in a PDF, so these foot pedals are just a way to tell your app to flip the page.

Even fancy-pants sheet music applications (I use Mobile Sheets Pro, which is one of the popular ones) is really just a glorified pdf reader-- it just has easy ways to group and display songs into set lists and stuff, and has tools easily write notes in your music, zoom, crop out huge borders, too. You can even tell it "When you get to Page 4, turn back to page 2 because I have to take the repeat. Then when I get to Page 3 the second time, jump to Page 5 for the coda." That's all in the app, not the pedal.

The pedals have been around for a long time, honestly... I just never needed one until recently. The pedal effortlessly pairs with your tablet via Bluetooth, and then when you hit the footswitch on the right it turns the page forward/up, and the left footswitch turns back one page. They have a no-stick back so you can't easily accidentally kick it off the stage. :-) The cheapie pedals are fine-- no need to spend a fortune. This is the one I own-- the PageFlip Butterfly. (https://www.amazon.com/dp/B01LIROF7W?ref=ppx_pop_mob_ap_share)

Some people like their foot pedals to have a click so they have some kind of tactile feedback. I got a silent one because nobody wants to hear clickity-click during a quiet moment.

They also make pedals with four foot-switches, and you can assign from a bevy of actions you want to each footswitch. Forward/back, and maybe "back to the top" or "open next file" or whatever.

Forward and backward is all I needed.

I imagine a foot switch could be handy for table reads, or even transcriptionists, too.
Jill "xtingu" Knapp 6/14 '19

Now I want a series of foot pedals for all my online reading and browsing...
Anne Mollo 6/14 '19

I am jealous of Thomas Boutell ​​​​​​'s fancy bullets he used in an earlier post. I don't know if my bullets here will be as pretty and diamondy as his. Let us try in a listo!

It was a magical, bittersweet night... and I'm so happy to be part of the World Cafe Live community.

(And I'm also very happy to hear that we now have an "in" with LiveNation... but that's a topic for a different day.)

[Edited to add on Saturday: The muscles/tendons in my left forearm that control my left pinky (The G# key, as well as all the sub-C notes on a sax) is nice and sore, as are my hands and the muscles in my neck. I friggin' LOVE playing Moose (my tenor sax) but lorrrrdy these hands hurt afterwards. Totally worth it, though!]

* There is an important difference between a singer, a player, and a musician.  Just because you can carry a tune or play an instrument does NOT mean you are a musician. Can you arrange a song? Can you tell me what a diminished chord is? Can you tell me the difference between dorian and mixolydian modes? Could you music direct a show? Could you write the parts out for all of these other instruments?  No? Then you're not a musician.  Words have power.  Please do not appropriate the title of what so many of us have trained so hard daily for DECADES to achieve.

I didn't use standard listo bullets. I just pasted in some Unicode diamonds. The End uses diamonds in their own design, so it felt apt.
Thomas Boutell 5/28 '17

oh PLEASE tell me there's video of all of this! i was so bummed i couldn't get down there for the show, it sounds like you kicked your usual ass! <3

LOL - yeah, I pretty much just had the same reaction.
Matt Lichtenwalner 5/30 '17

Also? Welcome aboard. It's good to see you here.