Still been watching more TV than movies for the last few years. Though "Knives Out" and "Everything Everywhere All At Once" were fantastic.

We got Disney+ to watch "Wandavision" and "Loki"; also made it through "What If", "Hawkeye" and "Obi-Wan Kenobi".  I watched one episode of "Falcon & The Winter Soldier" but mostly gave it a miss. The Marvel shows are interesting but uneven, and watching Star Wars shows reminds of how little I really care about it any more.

We put Disney+ on pause when we got Prime and Netflix to watch "Wheel of Time" and "Sandman" with the family. "Wheel of Time"...I'm not quite satisfied with the adaptation, though not for racisty kind of reasons. The casting is not a problem. But they just played too fast and loose with the story, particularly near the end of the season, until it just wasn't the story I wanted to watch any more. Admittedly, the first book was never my favourite, but I just hope they don't screw up the later stuff. "Sandman" was better, though I'm still That Guy who mostly focuses on the things they did differently. Maybe I'm just doomed to always be disappointed by adaptations unless they're word-for-word identical.

With the family we've been watching Babylon 5 on a weekly basis; we're up to Season 5 now. At some point in the past I'd thought to myself, "Simon will have graduated from university before we finish. I wonder if we'll make it through?" But Simon is still job-hunting, and not eager to move out in a pandemic, so maybe we'll make it.  We also started belatedly watching "The Good Place", which we've been alternating with B5, mostly two episodes a week, and we're only two from the end. That is a great show, and it is good to know I'm not completely unable to like new things.

With my wife we've been making our way (slowly) through a number of shows. We're two episodes into "Rings of Power", two episodes from the end of S2 of "Star Trek: Picard", two episodes into the new "Quantum Leap", one episode into S3 of "Star Trek: Discovery" (but we haven't watched it in a while). We had been watching Doctor Who with two of the kids, but they bailed after the end of Tennant, so it's just been the two of us watching Matt Smith. (I've already watched to the end of Smith, and I stopped there so the others could catch up.)  We just finished "The Pandorica Opens" there.

And myself I've been rewatching a lot of stuff--I finished making my way through Star Trek: TOS and have started on the animated series, which is better than I was expecting, and also jumped ahead to TNG (where I'm in Season 3). Also rewatching "The Muppet Show" desultorily, "Friends", "Red Dwarf" (which I've been buying on DVD because it's so hard to find online), "Buffy" (but only to sync up with a podcast I've been listening to), "Lost", and "Lexx". I had been rewatching "South Park" but it disappeared from the streaming service it was on, and I find that I have aged out of its humour or something so I may just give up.

I'm also watching "Glee" (into Season 3, now, I think), and "The X-Files" for the first time. I avoided "X-Files" first time around because I think UFO mythology is stupid, but I decided to give it a try anyway, and I find that I mostly just like the Mulder-Scully dynamic.

There are of course also a few that I've tried and given up on. I got four episodes into "Yellowjackets" before deciding I didn't care about it any more, and two episodes into "Only Murders In The Building". I've watched two episodes of "The Man In The High Castle", at least partly because one of my friends is in it, but it's just too bleak for these days so I doubt I'll keep up. We tried "Resident Alien" but haven't gone back to it, and I wasn't impressed by the first episode of "Star Trek: Lower Decks" so I haven't pursued it either.

I stopped "Torchwood" after the end of Season 2 because they just decided to kill off half the characters; we stopped "Angel" after Season 4, though we haven't quite given up on it yet. (I mean, they did get rid of Connor, but it doesn't sound like we're getting Cordelia back, and Whedon's star is on the wane, so enh.) We never did get back to "Supergirl" after "Man of Steel", and we don't find ourselves missing it either.

Then there are things we mean to watch sometime. I'm very curious about "Star Trek: Strange New Worlds", and I enjoyed the first two seasons of "The Orville" and want to continue that. The kids evinced some interest in "Stranger Things" so maybe we'll try that while we have Netflix (which may not be forever). We watched "Good Omens" on DVD but Jinian wasn't old enough yet and keeps bugging us about watching it. And there's tons of other stuff too. "The Witcher", maybe, or "Andor", or "The Mandalorian" (though see above re: Star Wars), or "Orphan Black" or "The Librarians" or "The Magicians" or...who knows what.

But we are not binge-watchers. With the family, we can manage our one night a week, most weeks at least; with my wife, maybe we can manage one more hour of TV a week. And by myself, it'll depend heavily, but I hardly ever will manage to watch an hour of TV every night. So we will never catch up. There will always be more stuff. The FOMO is real.

The Mandalorian has enough charm to stand on its own. I haven’t surveyed people who never saw Star Wars, but I think they would love it also.

The Good Place is shockingly good.

If you have HBO at any point, we are really into His Dark Materials. aka the Golden Compass adaptation. We are about four episodes in.
Thomas Boutell 11/6 '22

I have heard good things about HDM. I read the series to my daughter a few years ago, though, and she was really pissed about the ending. Particularly, she did not think Lyra and Will should have gotten together in the last book. So I don't know that it would become a family viewing experience. 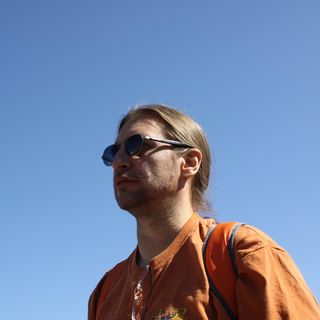 Heheh, Lexx. You can blame me for season 4. We were Nielsen journalers during season 3 and it's the only thing we watched regularly.
Kevin Schnitzius 11/6 '22

For whatever reason I have only seen like one episode of Season 4. (That was the season on Earth, right?)
Aaron V. Humphrey 11/7 '22

Btw Dennis Valdron has a great series of ebooks about the Lexx series which I've been trying to read along with the rewatch.
Aaron V. Humphrey 11/7 '22

On D+ it's worth watching Ms. Marvel and She-Hulk. Kim enjoyed The Mandalorian; i've given new SW stuff the miss, but i'm very tempted by Andor because of all the good noise, as well as it being helmed by Tony "Michael Clayton" Gilroy.

Speaking of She-Hulk and Canada's own Tatiana Maslany, do not miss Orphan Black.