So, Aruba. I spent 14 days in Aruba with my 10 year old. Here’s my thoughts about the trip, mostly from a things to do perspective.

TLDR - Recommended things to do

You can certainly go to Aruba and just lounge on the beach the whole time. There are certainly tourists who do that, and hotel resorts that cater to that. But I’m the type of traveler that wants to do stuff. So this is stuff to do. There are lots of good places to eat/explore on the island. Do get a rental car to facilitate this exploring.

Recognize that Aruba is a small island. 100k people, 20 miles long (the long way!) Like 6 miles across. Still, you probably want to rent a car.

Also it’s a desert. Think Arizona climate (if you’re familiar with AZ), that also happens to have beaches. Beautiful beaches. On one side of the island (the west) are lovely swimming beaches. On the other side, they are super rough/rugged/don’t even think about getting in the water beaches. (Sad story: while I was there, apparently a vistor went into the water on the rough side after the tour guide said it would be ok. And drowned. Just don’t.) It’s always 80-90 degrees. Year round. And breezy. Super breezy. Make sure your hat fits tight, or has a chin strap. And bring a hat - it’s hella sunny out there!

There are lots of cool lizards out and about. Little ones, big ones.  I especially like the blue ones. And some sizable iguanas. The cat sized one that hung out by our condo we named Big Liz. They have the goofiest run. There are a bunch of birds around too which are fun to watch. In particular we saw Magnificent Frigatebirds (which we call demon birds because of their silhouette), brown pelicans, cool orange-black Troupials, and a wacky looking large bird which I think was a Crested caracara. Aruba’s national bird is a burrowing owl, but we didn’t come across any. 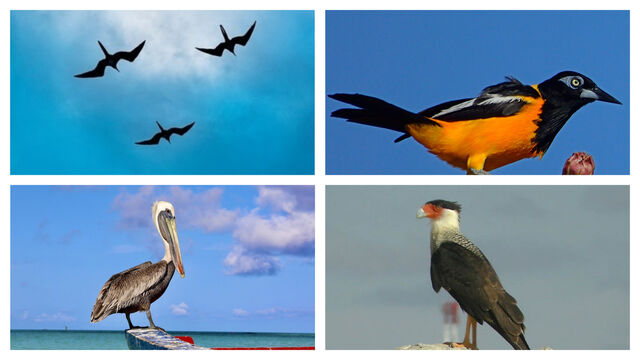 ^^ These bird pics aren't my photos, just ones I found that look better than the photos I took ^^

There is no fresh water source on the island, unless you count the occasional rains. Beats me how people used to live here in the precolonial/colonial times. We did see a cistern from colonial times that supposedly held 3-4months of water. But it barely rained while we were there. Again, not sure how they made it work way back then, maybe it rains more than I recognize? Today they have a desalination plant, and the tap water here is some of the best I’ve ever had. They even bottle it.

The main industry here is tourism. And like 70% of the tourists are from the US. (Even though it’s just 15 miles from Venezuela - you can even see the mainland on a clear day.) English is spoken everywhere. US dollars are accepted everywhere. I mostly used my visa, except for tips and that one bakery that was cash only.

Packing tip: you’re going to want to bring snorkel gear to look at all the cool aquatic life. Or at least a great pair of swim goggles. Bring sun protection. Bring water shoes.

We booked an afternoon horseback tour at Rancho Loco to the Natural Pool. After about an hour on a horse, you get to a natural pool. It is the only(?) protected place to swim on the east side. And it was fabulous. Rough waves hitting the other side of the protected rock wall, spraying water high. And a calm pool to hang in. This is 100% bucket list material. It doesn’t get any better than this. 10/10 would go again.  This makes Ursula's "Best Of" list (a list that I've just decided to start).

If horses aren’t your thing, you can hike in for about an 1.5 hours each way. So 3 hours roundtrip. Or rent a off road capable vehicle like an ATV. ATVs are icky IMHO, and walking would be arduous in this climate for me, let alone for my 10 year old. But the horses, that was awesome, and the payoff of the natural pool was so worth it. I also liked the romanticism of pretending it was cowboy times while on the horse. Even if my butt was sore for 2 days after. (Note, the horses only take people who weigh less than 235 lbs. Even though technically the horses can carry larger people, the ranch doesn’t want to stress them.) 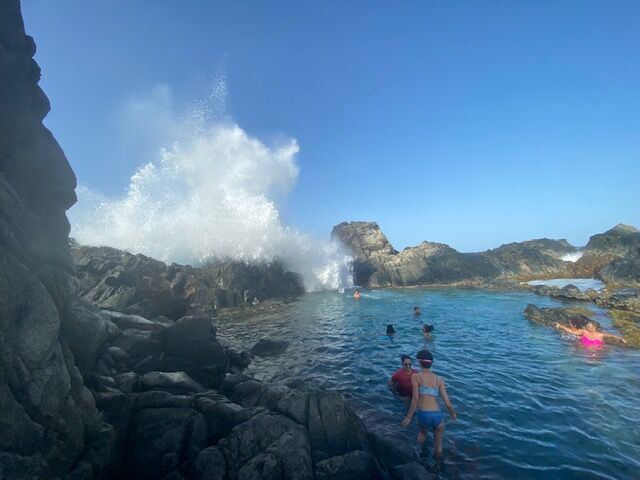 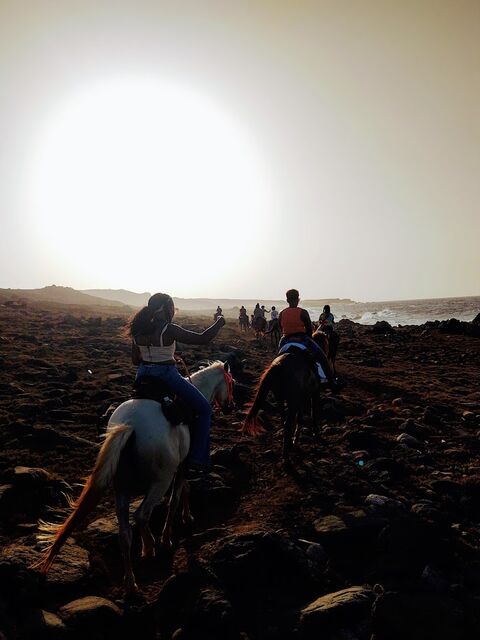 Other things to do:

And then some days you just want to sit at a beach club and chill. I didn’t really check out the options; I found one I liked and went there twice. It is called Reflexions, and it’s just a few minutes north of the airport. You can watch the planes land - the airport is close but not obnoxiously so. Sometimes people wait on this beach until they see the plane land before they go on a pickup run. We'd get there around 1pm, stay till sunset. Sometimes they have DJs or bands. There is a small swimming pool in the bar (which frankly got gross later in the day, but the kid loved it), lots of chairs with umbrellas or covers to be had. And some excellent drinks. And good food, a step up from your typical bar fare. 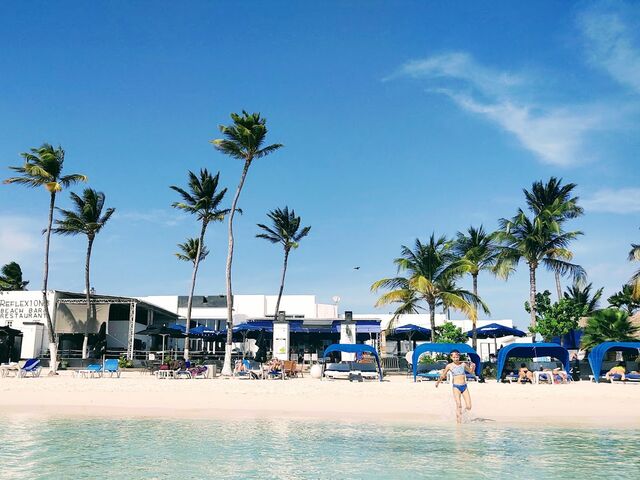 There is a national park that takes up like 20% of the island. (That arid rugged east side mostly). You need a car or a tour to get there. In this park, about a 20 minutes drive inside the park is a cave with petroglyphs (and colonial graffiti). Also, bats inside. And lizards outside. It's cool, especially if you are keen on petroglyphs like I am. Definitely worth doing.  (Actually, that natural pool I mentioned above is also in this park. You’d ATV/hike from inside the park. The horses came up another way.) BTW: Google maps sent me to someplace that was certainly not the park entrance. Get close then follow the signs instead of wherever G sends you. 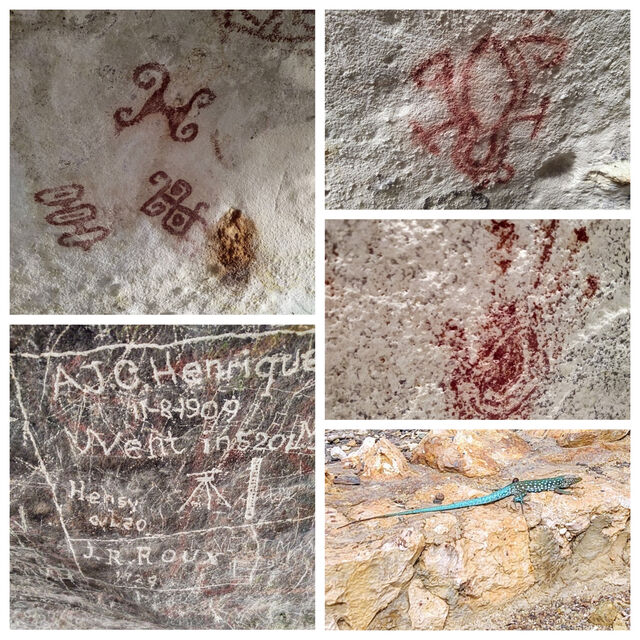 There is a lighthouse on the northern tip called the California Lighthouse. Not sure why it’s called that, something something about a ship called California that sank when it was being built? I’m sure you can google it. Anyway - Go! Pay the $5! Climb the zillion steep steps on the spiral staircase up! See the amazing windy views! Deal with your kid then being too terrified to climb back down! Good times. Also, at the bottom, get a fresh coconut from the coconut guy. And watch his pet parrot peck at your kid when she invades its personal space, terrifying the kid. Haha. More good times. Another $5 well spent.

The final thing I really can recommend is take a snorkeling “cruise”. I did Jolly Pirates, but there are others. Some include lunch, some do not. Most all include an open bar. And they include your snorkeling gear. They almost all stop at the same 3 or 4 places. Though this one seems to have different spots https://www.tranquiloaruba.com/ (next time!) The snorkeling in Aruba is some of the best. One of the standard snorkeling spots called Tres Trapi is just offshore. You can actually drive to it, in case you want to go back and experience more snorkeling but not take a second cruise.

We also visited the small free National Archaeological Museum Aruba. I like to hit these sort of historical museums at the beginning of a trip to get an awareness of a place’s backstory. It’s where we saw the cistern and learned about the petroglyphs, and about the pre colonial and colonial times.

No food recommendations - why? I’m not a foodie. I noted portions are large. I enjoyed everywhere I ate, but I’m so the opposite of picky. Also I was feeding a kid, so we didn’t try anything exotic. So we stuck with meals of burgers, pasta, chicken and poffertjes (dutch small puffy pancakes). So I don’t have much by way of food recommendations except ask around, and use your google-fu. The restaurants here are good, but it's not cheap. Expect US prices or maybe even a tad bit higher.

We went to the closest burger joint called Local Store several times. It had this cool mural on the side that among other things, incorporated imagary from the island's petroglyphs. How cool is that! 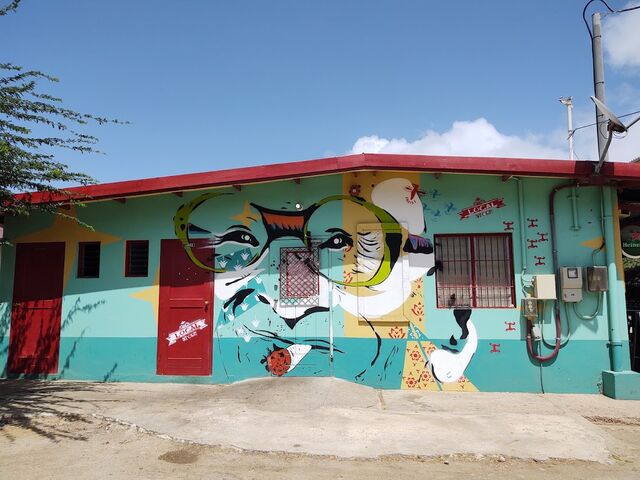 Some things that we coulda shoulda done is

Saving these for next time!

There is also a “private” island beach club “De Palm Island”. It’s like $100 for a day of all-inclusive fun. I didn’t do it, but maybe next time. Maybe. I was pretty content at Reflexions. But on the other hand, seeing flamingos would have been cool.

There are on the southern side a few more beaches, and another town called San Nicolas. Baby beach is the big name, there is also a super deserted beach calle Boco Grandi. It looks very peaceful, but the kid had seen it before and said it was boring. So we didn’t go. San Nicolas has a bunch of cool murals, plus is known for the bar “Charlie’s” but I forget why. I do know the licence plate of my old camper is on the bar, as are a zillion other plates. It’s the Delaware tag that says “Guppy”. If you see it, send me a photo!

I didn’t really do any nightlife because I had my preteen in tow. I did get out for 1 night to the Renaissance downtown for a sunset DJ set and their rooftop (no kids allowed!) club. That was sweet, and would be cool to do again with adult friends. Assuming I can talk someone into traveling with me.