In between, my old roommate, Rick Desautels died of a respiratory infection.

We had been pals and roommates for ten years, during our desperate twenties and into our thirties. He had survived two bouts of chemotherapy for non-Hodgkin’s lymphoma. A third roommate, Bernie Lisewski, committed suicide in 2003. We reunited at his memorial service to scatter his ashes. The last time I saw him was in 2004, when I was returning from vacation in Charleston, SC. I stopped in Raleigh and hung out with him for a day. We lost touch after that. In those missing years, he went through another round of chemotherapy. Each successive round took a toll on his heart and lungs. His doctor had recently told him that he had the lungs of an eighty-year old man.

Rick never had a big footprint on the internet. I searched for him from time to time over the years. The only thing I ever found was an arrest record for possession of a weapon of mass destruction. I was only a little surprised and surprisingly proud. (It wasn’t a weapon of mass destruction. It was a training model of an AT-4 rocket propelled grenade.)

In between the time I knew him and his passing he became a staple at a burlesque theater in Raleigh. He would hold down the stage or work the door. He armed the dancers with pepper spray, walked them to their cars, controlled the odd drunk or handsy audience member and generally made himself an invaluable member of the community.

Rick, or as he was known and loved by the burlesque and nerd community in Raleigh, Lord War Bunny, had a massively irreverent sense of humor. He enjoyed tilting at windmills and his lance was humor. Sarcasm was his super power.

His brother Chris described him as a man of intense passion and little ambition. But what Rick cared about most was people. He wanted people to be safe. He might grumble about it, but he’d walk the girls to their cars and make sure they weren’t hassled by the patrons. Even if they’d have to stop for him to catch his breath on the way there. At his memorial the celebrants described how when they entered a new venue for a game, a convention or a performance if they looked around and spotted Lord War Bunny, they knew that was their safe place.

The celebrants at the mundane memorial and the memorial held by the burlesque community for him described how they’d hear that Bunny was in the hospital. And at the next show he’d be standing there next to the stage. His quiet presence reassuring them that everything was okay and nothing was going to go wrong. And it didn’t.

Good job, buddy. You’ve earned your rest. I’ll be along someday. Make sure you save me a seat. 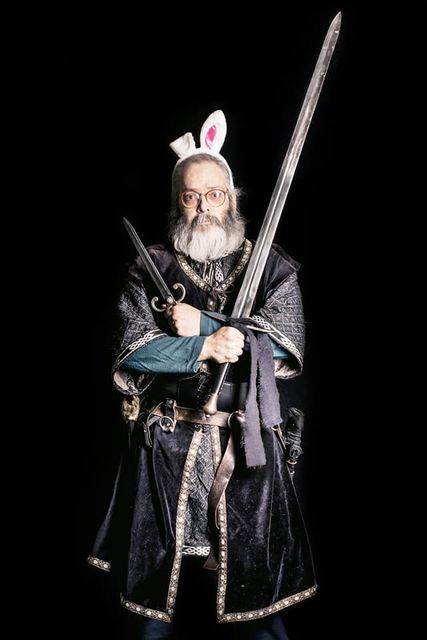 Holy lord. It's the understatement of the year to say that this has been a very rough patch for you. I'm lousy with comforting words, but please know that I love you very much and would be honored to be a sounding board for you... or just to be a friend where you can sit quietly with no obligation to talk.
Jill "xtingu" Knapp 4/30 '19