I frequently foster dogs for a friend's rescue. It's usually a good thing. This would be one of the times that it isn't.

I've fostered dogs whose owners were murdered in front of them. Dogs that were abandoned in an apartment and only rescued just shy of death's door. Dogs that were owned by an elderly person who had to be placed in a facility. If I had to make a bet, that's what I think happened to my latest dog, Mr. Pickles.

Mr. Pickles, or Pickles as I call him is probably a Fox Terrier / Mexican Hairless crossbreed. He's small, ~ ten pounds or so, long legged and roach backed. He's got almost no hair on his back and the fur on the top of his head has that wispy quality like the Mexican Hairless that have crests. He's six to eight years old and when he was found wandering stray, his left eye was detached and badly infected. So the vet took it.

After he moved into my house I discovered that he is not housetrained. It's not uncommon for a small dog that lives with an elderly person is paper trained, but never housebroken.

But Pickles can't live with me foreever. So in order to have any chance at finding a good home I have to housebreak him.

More news on this story as it occurs. 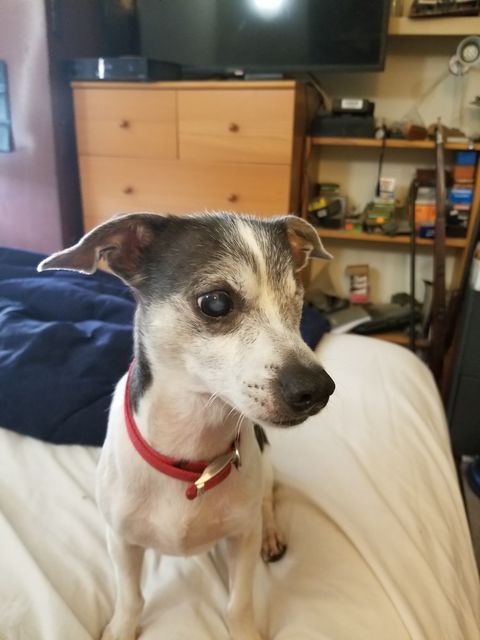 But that there is a VERY CUTE DERRRRRG! I'm sorry he's making a mess of your place. With any luck he may learn some habits from your other doggos. But oh my god, look at that doggie face... so cute!