They're brother and sister. They're over 15 years old. Yes, they are extra large. And they spend most of their time staying far away from each other or fighting. So this is rare treat! 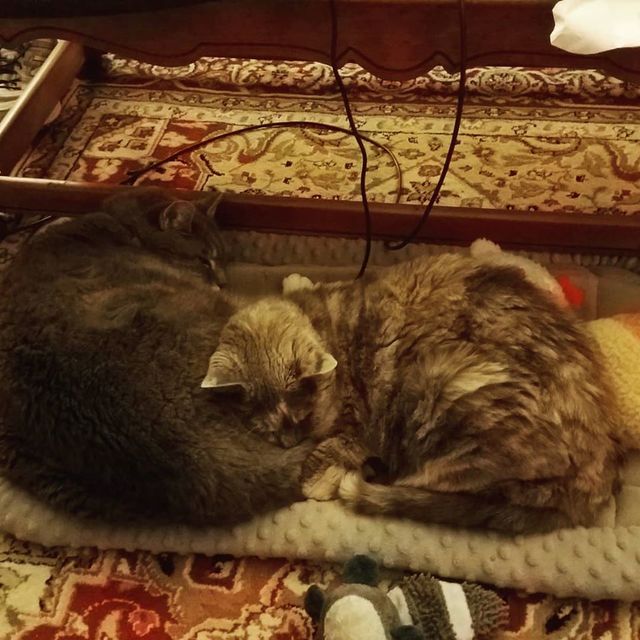 This may or may not be helpful to other people. I recently finally went off of birth control pills. I've been on them for so long it just didn't even occur to me that it might be time to stop at age 51, but my doctor said yes, it really is time to stop. So I've been off them for several months now. So far it hasn't been too bad except for the night sweats. I haven't had any day time hot flashes so far. And maybe I get a little more weepy over silly things, but it's hard to tell. I've always cried pretty easily. But it occured to me shortly after I stopped taking them, that maybe, just maybe, the BC pills might have been responsible for my red wine headaches. I've done a few experiments so far, slowly building up to drinking a full glass of red wine. And I'm so happy to find that YES, getting rid of the BC pills was the key! Originally I couldn't stand red wine, but then I learned to love it, but I also realized after a while that it was responsible for these god-awful headaches I was getting in the middle of the night. So I gave up red wine entirely (not even doing a tasting) for the last couple of years. I'm so happy that now I can not just smell the deliciousness of red wine, but actually go back to drinking it. It's a weird subject, but maybe there are some more of you out there that gave up red wine and don't realize that maybe you're at a point now to try it again. Cheers!

Menopause is one of the weirdest things. I don't think our generation considers it a taboo subject the way previous ones did, but WOW they didn't tell us anything. They suffered.... and kept it from their daughters. Those morons. Go, you! Talking about it and finding out that there are upsides to "the change"! Enjoy your wine!!
Karen Hoofnagle 12/12 '19

Yesterday my hubby and I chose to skip a JMU production of Twelth Night that we had bought tickets for months ahead of time in order to see Alien on the big screen in Charlottesville. At first I felt a little bad because I'm sure the students did a really good job (they always do), but I'm deciding to consider it a donation to a favorite institution. I'm sure the people who were sitting in the seats next to ours wondered why anyone would not show up to something for which they had paid $40 (the show was sold out), but it wouldn't be the first time. We've attending many events at the Forbes Center where we knew seats were sold and then not filled, so I'm sure we weren't the only ones who didn't show up. I wish I could've done both events, but the showing of Alien was a last minute thing (as far as I can tell) and there were only two showings on Sunday, both of which conflicted with the play which was going on right in the middle of them. So we chose to spend another $25 (plus the gas to get there) and see one of my all-time favorite movies on a giant screen. And we were not disappointed! I've watched Alien countless times, but I was only 11 when it came out and apparently I missed the re-release that happened for it's 25th anniversary, so I was thrilled to celebrate its 40th anniversary with about a dozen other fans in the theater. It doesn't matter how many times I see that gruesome thing pop out of John Hurt's chest, I love it every time! Definitely money well spent!

The college box office could really use a way of letting you tell them "I don't want my money back, but definitely resell our seats!" Never feel bad about having too many good things to choose between!
Karen Hoofnagle 10/15 '19

So it took me a little while, but I just realized that I had accidentally created two accounts on here. At least I never wrote anything on the other account. My first clue was the fact that I couldn't find the couple of other posts I had made on the other account. I figured they had just been deleted because I hadn't written in so long, and I was ok with that. But then I saw my own name in the people list and I'm like "Wait a minute!" LOL So now I'm good, just excuse my stupidity. :)

Welcome! Given I just discovered I'd hidden 3 posts for months, you're not alone in the doing it wrong!
Karen Hoofnagle 10/11 '19

I recently turned 50 years old. You would think that I've thought of myself as a grown-up for a long time, but I'm sure most of you don't really, in your heart, no matter how old you are, feel much more than 20. I know my body won't ever be like it was when I was 20, but in my head I don't really feel like I've changed too much.

One of the things that has never changed about me is that I hate confrontation and I always want to help people even if I know I'm getting myself into something messier than I want to deal with. But today I really proved that I have grown up and learned some lessons.

A high school friend of my daughter's (who's 22) asked if she could move in with me because she's taking a semester off from college and she can't take living with her parents any longer. A big part of me really wanted to help her. I love a lot of my daughter's friends like they're kids of my own and while her parents aren't physically abusive I know they're overbearing and hard on her. But she was asking if she could move in with me for five months! If it had been a week or a month, I probably would've said yes, but 5 months with another person in my house?! I just couldn't do it.

My husband and I have only been married for three years and quite frankly we're still like newlyweds. I love that my daughter is grown and succesfully out on her own and that my husband and I get to spend a lot of our time alone. So I told my daughter's friend this frankly and she said she understands, but I still feel badly. I was tempted to carry on the conversation (this was in texts) to try to offer advice, but I was worried that if I continued I would get sucked into letting her stay for some unspecified time. So I just let the conversation drop.

And that's how I know I've grown up because I know where to draw the line. To say "you are a grown-up now too and you have to figure these things out for yourself." But it still leaves me feeling a bit wretched. :(

Drawing boundaries is always OK. Adjust your own oxygen mask before helping others.
Thomas Boutell 8/22 '18

As seems to happen too often, I had to be a problem. Computers are weird and who knows why, but my first invitation to this forum failed for no apparent reason. I want to thank Tom Boutell so much for working with me to find a work-around. I am a Facebook fanatic, mainly because I'm otherwise anti-social and I would never be able to keep up with people if I didn't have it, but it does get to be a bit much sometimes. So I'm happy to have a place to go to that's less frenetic. And now I'm off to read all those posts that I've missed.

You finally made it!! *waves* I was beginning to wonder what had happened over there.
Karen Hoofnagle 7/20 '18