This is a Singer 401. There are many like it, but this one is mine.

Full Metal Jacket analogies aside, the 401 is an excellent machine. It has all-metal internals, comes with many stitches pre-programmed by the virtue of having an internal cam stack. It can also accept an array of swappable cams for even more stitches.

But it has some drawbacks. Despite being manufactured in the 1950's, the foot pedal (technically called the 'motor controller') is the same model that Singer used since the 1920's. It's a graduated resistor, that lowers resistance until a simple circuit is achieved at full pedal depression. The side effect of this is that when you aren't using the machine, the pedal tends to heat up. Since its resistance is blocking the current flow. Additionally, since carbon tends to build up on the disks in the resistor, older pedals tend to make the machine leap into action with not a lot of control at slower speeds.

Which is a problem.

There's a later series of machines called Touch & Sew, called Touch & Throw or Touch & Swear by afficionados. They have a more powerful two speed motor with an electronic motor controller. By a quirk of manufacture, the motor in the T & S machine is the same physical size as the one in a 401. So, with some simple mechanical skill, a bit of soldering a little fabrication and a whole lot of creative cursing, you can upgrade a 401. 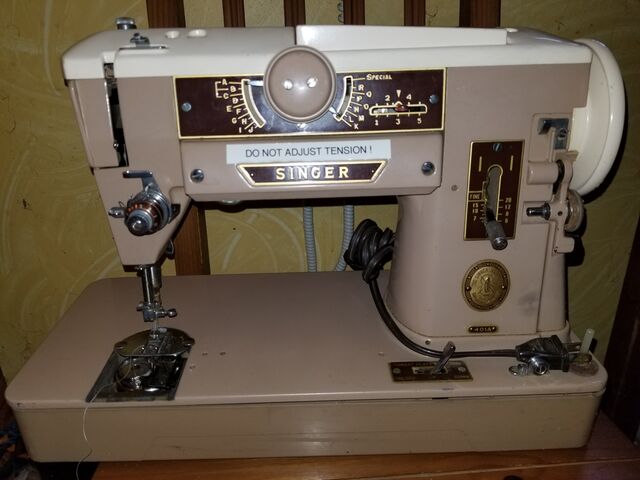 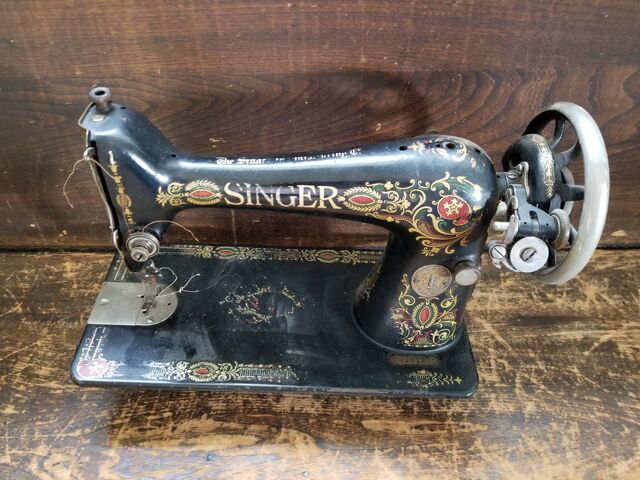 I picked up this well-loved beauty along with a knackered treadle base for the princely sum of $8. It's a Singer 66 'redeye'.

The unit below was purchased for $50. During cleaning I discovered that someone had been inside without knowing what was going on. The foot controller was disassembled, and stuffed back into the housing any old which-way. The machine internals were misassembled in such a way that one of the critical washers was bent. It is made from hard steel. I'm impressed and a little torqued off. Anyway, I scavenged parts to get it running. It's a Singer 99, a 3/4 version of the 66. It was made in 1955, electric from the factory, with a mechanical reverse and capable for making 30 stitches to an inch. It's got pristine decals and nearly flawless paint. I'm sorely tempted to keep it. But it's likely going to be a candidate for some horse-trading.

Below you can see it as purchased and after about four hours of cleaning. 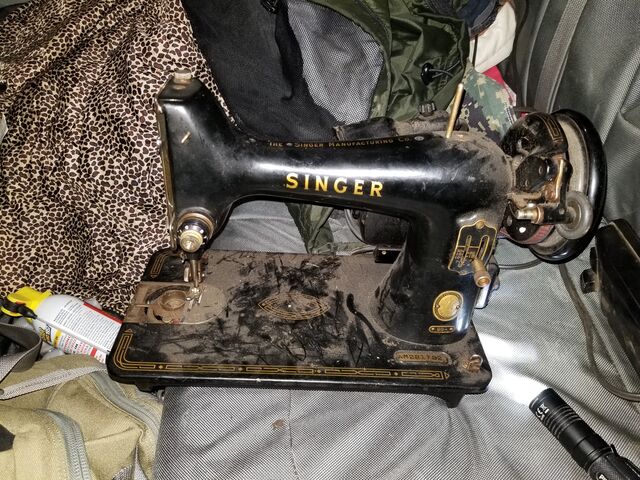 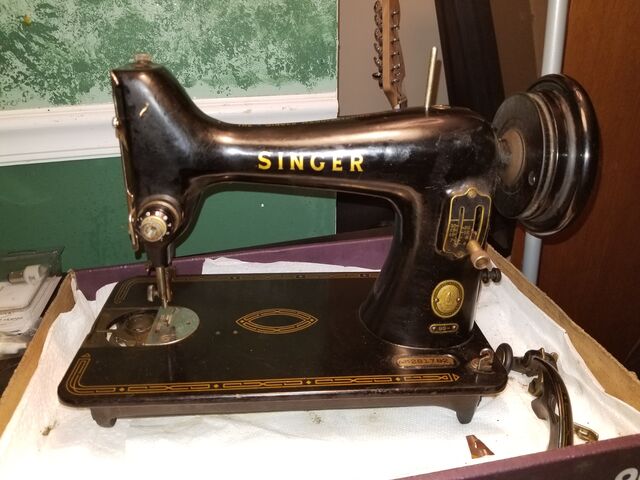 And I have to wonder if beautiful, interesting design work will ever come back into the making of appliances (without driving the cost beyond reach, of course).
Anne Mollo 8/9

If you think the black iron singers were well-decorated you should see the prior generation machines. Called fiddleback or fiddlebase, they had mother-of-pearl inlays in the working surface of their bases. Their gilt decorations were hand-painted. Because, they didn't do things by half measures in the late 19th century.

These machines were lifetime investments. And I think that they wanted them to be beautiful as well as functional. Given that people were commonly buying them on installment plans that stretched out as long as twenty years, you can understand the interest in keeping the customer pleased. They also had an active, customer-oriented dealer network, that would sell, service and maintain the machines. Interesting factoid, Singer was the largest furniture manufacturer at the turn of the century, and the 7th largest company in the world.
Ray Conrad 8/9edited

This base weighs 80 pounds. I moved it three times today, each time by myself. Once out of the home of the elderly couple that was selling it and into my truck. The second time out of my truck and into my living room. The third time up a flight of stairs into my office/workshop/den of geekery.

I have died. Or I think I want to die.

I did survive long enough to mount my period-correct 127 into the treadle base. I have a belt on the way from Amazon. Sometime Monday evening I'll give it a live test run.

The treadle base also came with a gorgeous Singer model 66. Unchipped  base, fuly intact decals, 1925 build date. It's missing a few parts, but those are all easily obtainable. It's gummed up from sitting. So, a few hours of cleaning will be invested in solving that problem. Then, I don't know? Get rid of it? It's really nice. But I can't keep them all.

As a bonus I was given a Singer 237. A nice, all metal, electric. It's going to get cleaned and probably recycled to market. 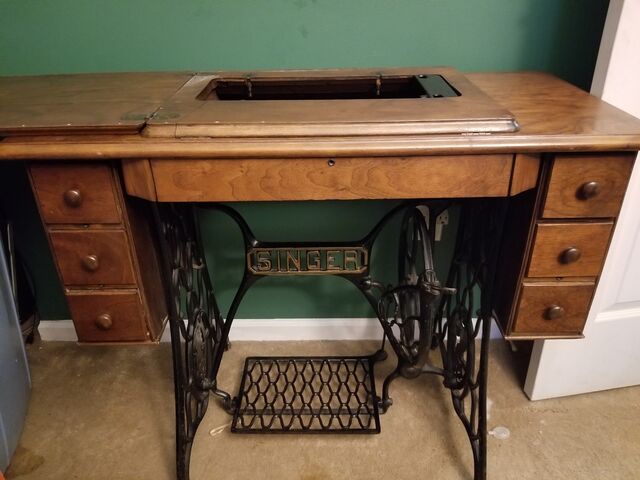 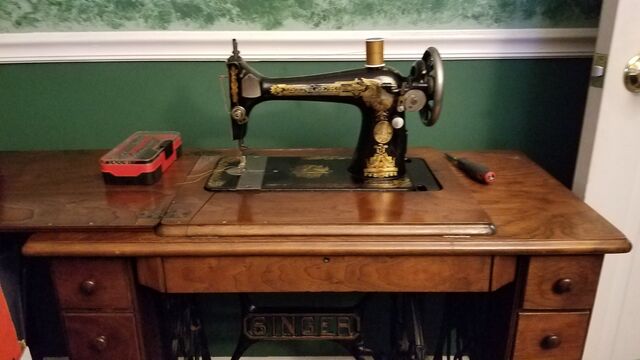 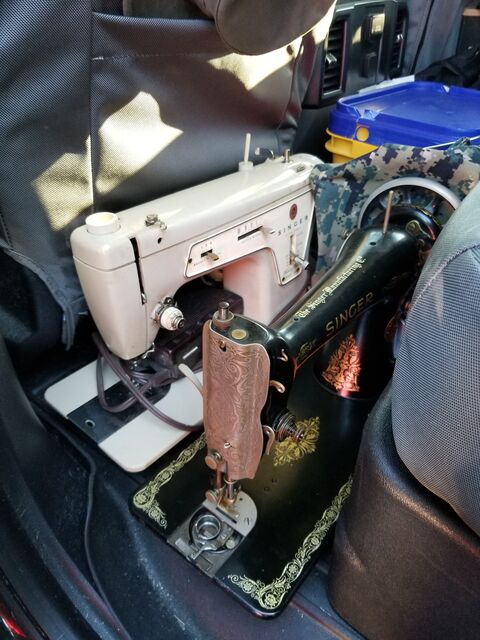 Wow that model 66 is BEAUTIFUL.

I often wonder if I should've kept my mom's old Brother machine. It was from, I don't know, 1955ish maybe? All metal work horse of a machine, but I've got a less-ancient Elna that has always met my needs.
Anne Mollo 8/1

Wow! We had a Singer base that looks to my ignorant eyes like it was identical to that one in the house when I was growing up. It wasn't in as nice shape, but very very similiar design. There was no machine in it, and Mom just used it as a table, but I always thought it was pretty awesome and enjoyed working the pedal.
Matt Lichtenwalner 8/1

My godmother, Stella, had a treadle base sewing machine in her kitchen when my sisters and I were growing up. We'd sit under the machine and run the treadle while she sewed.
Ray Conrad 8/2