So, the new heat pump went in yesterday. I've been living without a heat pump for 2 years, after the unreliable old one went belly up on the first cooling day of the year. Winters, I limped by on the emergency heat circuit, an electric blanket and two dog power. Summers were handled by a sophisticated array of window air conditioners and portable units providing enough cooling to be comfortable/tolerable.

But of course there are no windows in the bathrooms of my house.

Consequently I spent as little time in the necessary rooms as possible during the summer. They were always warm-ish. Post shower it was advisable to skip shaving as often as I could get away with it. Shower, brush my teeth and dash.

But now the new heat pump is in! Huzzah!

I noticed it immediately as the temperature and humidity both made a precipitous decline. Because the odd thing about portables is that you're either freezing your 'nads off if you're in the direct airflow, or you're a bit warm if you're anywhere else in the room.

First impression: this thing is quiet. When the condensor fan kicks on I can't hear it. Which is probably the way it should be, I have just gotten used to listening to the industrial grade impeller grinding to life on the old one. It's a nice life upgrade.

For those keeping track at home, this is renovation project number three. Next up, windows. (No, not the OS from Hell. The other type.) 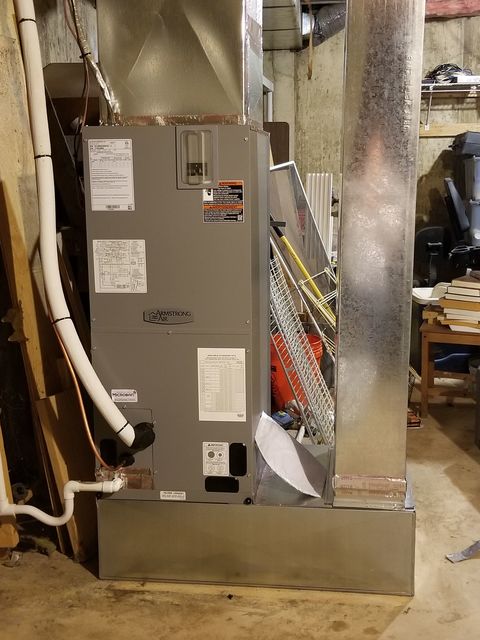 Gonna pay for itself quick I bet. Not that window acs are terrible, but electric heat...
Thomas Boutell 10/2 '18

The horrible heat pump I had was only about $20 less expensive than my array of inexpensive air conditioners. But that could have been because it was the crapola "unit that fell off the back of the truck".
Ray Conrad 10/2 '18

Wheeeee!!! Congratulations!! Dooood, I am so, so, so happy for you. I know how long you've been limping along with various things in your house-- this has got to feel amazing.

Here's to a comfy winter!

Since it's a heat pump, what's that mean for humidity in the house in the winter? Will your house be drier than a house with non-heat-pump heat? If so, I have a brand-new (and stylish!) room humidifier which we only used for one season before we got a whole-house humidifier put in (it came with our HVAC system). With the added humidity, our guitars and furniture and my skin were all infinitely happier. It's yours if you want it.
Jill "xtingu" Knapp 10/2 '18

As a bonus I also had them replace the flex line on my dryer with an actual hard duct. I kept the vent box that diverts the dryer output into a second lint filter and into the basement, keeping my house nicely humidified in the winter, and reclaiming some otherwise waste heat.

I'll pass on the humidifier, because with the windows up next, most of my belongings will be moving out to a storage unit.

But that will also involve <dramatic music> a great purging of THE STUFF! <dah dah DAH!>
Ray Conrad 10/2 '18edited

'Tis indeed the mythical tape of ducts. The metalized version therein that is supposed to be used on ducts.
Ray Conrad 10/2 '18