I bought this "signed and numbered" print in 1998. The art was completed in 1989 and the print was made in 1990. When I moved into my house in 2000 I had it in a crappy poster frame. The frame broke during the move. So the backing cardboard with the print reversed  and covered by the backer paper went on a closet shelf. Where, due to my mad procrastination skillz, it languished for 18 years.

A friend who knew about the print gave me a 60% off custom framing coupon to a local cafting store with orders to "Get Betty off the shelf", which I dutifully did before Thanksgiving. 60% off of nearly a thousand dollars, since I obviously wanted acid-free paper and museum glass to preserve the valuable (hopefully, someday) artwork.

I made note of the artist and Googled him after I paid for the framing. Seems like this fellow has about a dozen original pieces of Betty Page art, all done comic book style. And he's run 1000 signed and numbered pieces of each piece of artwork and sold for around $20. Each and every year.

I guess the value is in the eye of the beholder. 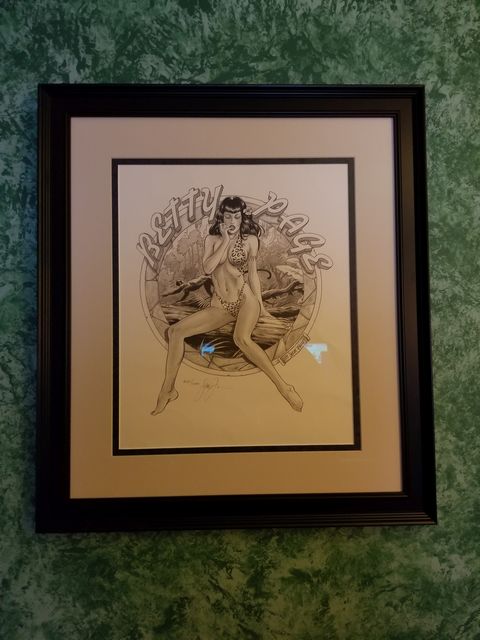 I think it's cool.

If it makes you happy, then even better.

But maaaan-- I didn't know framing was so expensive. I have a few hand-drawn pieces my friend Stefan made for me that need framing, and at $350 a pop, I may need to put that off a bit longer.
Jill "xtingu" Knapp 12/8 '18